The difference between a three year-old and a four year-old is almost negligent in some aspects. Children will age and mature differently, but it is around the four year mark that things can change. For the most part, the activities that taught the two to three year olds about money don’t necessarily have to fall away entirely as new ways to educate them about money are introduced.

Ages 4-5: What to Communicate and How

The difference between a three year-old and a four year-old is almost negligent in some aspects. Children will age and mature differently, but it is around the four year mark that things can change. For the most part, the activities that taught the two to three year olds about money don’t necessarily have to fall away entirely as new ways to educate them about money are introduced. As I said in the previous blog, financial knowledge decays, so my suggestion is to continue lessons from before – with added complexity if suited or necessary. Simply put, four to five year olds are very likely to play the same games and perform the same activities as the two to three year olds. Role play and colouring in, for instance, are timeless activities. What can be introduced are lessons that are typically too mature for the two to three year olds and these lessons tend to subtly introduce the idea of responsibility. 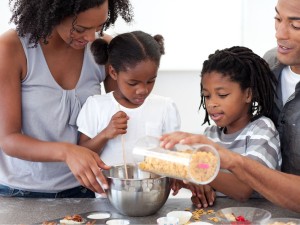 Regarding role play, the four year old may be ready to step it up a notch. It will require involvement from the parents to a large degree, but who can complain about spending time with their children. Now, this isn’t something you’d want to do every day, however regularly practising what I’m going to suggest can be really positive for everyone involved. Try introducing the concept of running a restaurant, at its basics, by preparing an evening meal right from the start.

Whether you’re a mum or a dad and are tasked with cooking supper for the family, it’s all the same now days. Involve your children in coming up with an idea for supper before going through the ingredients list and checking whether or not everything is available and what is needed. This can involve counting and will certainly involve stock take – which is a crucial aspect to financial responsibility. Once you’ve determined what you have and what you don’t have, you compile a shopping list before heading off to the store. There, they can assist in the shopping and if they are up for it, challenge them to find the items and the right amount and depending on their age and their knowledge of numbers, get them to read the prices and determine which products are the cheapest or have the greater quantity, etc. This part is not vital and is at the discretion of the parents. Once you’ve finished the shopping, the next part is cooking and preparing. Now, this part is straight forward and I won’t go into detail there. What I will suggest, however, is that the ingredients be measured and stock taken during or after preparation do reinforce the concept of running a restaurant. Once the cooking is done and the meal has been enjoyed, with the children encouraged to participate in both presenting and clearing the food, the typical routine at a restaurant can be concluded.

The children can choose to be the one receiving or presenting the bill for the meal. Either way, there are lessons to be learned. The child’s math won’t necessarily be at a level to carry out a complicated transaction and so assistance will be required for the more complicated aspects, but the process of performing a transaction is a great way of creating awareness that food costs money and so does the service of providing or cooking said food. This can be a fun and educational activity for children, but like I said, too often and the novelty therapeutic effect it may have on the parents could very well run out, so moderation is key to this being positive. That said, families are different and some parents have immeasurable patience that must, for the sake of all other parent’s morale, be kept to themselves. 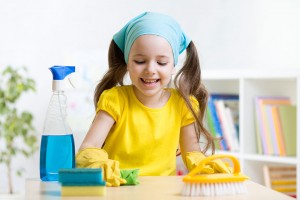 This is the perfect age to begin introducing chores, if parents haven’t already. And naturally, a system of reward, whereby the children understand that their effort and attitude toward their chores earn them an allowance similar to earning a salary, which can be explained to them in a way that doesn’t have their school teachers questioning you about illegal and unethical child labour. Teaching responsibility can be hard and tedious, but absolutely necessary. If not by now, then make it an absolute necessity that the children begin to comprehend the difference between borrowing and buying. In short, what is borrowed, must be returned. This goes hand-in-hand with respect for their own possessions and the dynamics of a home they have come to depend on. Understanding possession will teach them to value things and assist in their social development whereby respect for other people and their possessions is of great importance too.

The last, and by no means the least, of the activities a parent can introduce to their children, if they have not already, is the concept of saving. That said, what I’m going to suggest is not simply the traditional piggy bank concept, but something slightly different that teaches multiple disciplines. Buy, or preferably, make three jars, tins, or piggy banks, and label them “Save”, “Spend” and “Share”. Explain to your children the value in having these three jars and why they will always be important.

Firstly, the idea of saving money is a difficult thing to teach. One way to achieve this is to experiment with your children by providing a small amount of money each day of a designated week. Each day, you give them the small amount of money and offer them a choice. They can either spend it on something small each day, or they can save it up for the weekend at which point they can get something, or some things, with a greater value. Keep providing the choice and let them make up their own minds. I wouldn’t recommend performing this activity every week, but once a month or once in a while won’t hurt too much, especially if you find it is working. At which point you could change the terms of the experiment by changing the days-to-week connection to a week-to- month one.

Secondly, the idea of spending comes easily to children – as it would seem. There isn’t much to it and as for activities the two afore mentioned activities suitable for children in this age bracket will contribute toward a greater understanding of spending. Both the restaurant activity, in which they had to monitor closely what was spent and what was needed for their role play, as well as the saving experiment which involved the choice between spending their money immediately or after saving it, contribute to this understanding. Have them very aware that once they have spent their allotted money, they will have to wait to earn or save more money in which to spend – or save.

And lastly, sharing. This concept won’t be entirely alien to children. There are many ways in which to teach children about sharing, from arranged or spontaneous play dates in which they are required to share their toys or the toys of other children, to explaining what you are doing, as the parent, when dishing up dinner at the table so that everyone got an equal or proportionate share. There are many ways to get this notion across. There is one way that I find particularly interesting and you will certainly be surprised by how your children respond to it. Once they have filled the “Share” jar, present them with a choice as to what they wish to do with the money. I could suggest that they buy something nice for their class mates or family members in which they share in the rewards of saving.

However, there is another option. Explain to your child the basic tenets to charity and why it is important. Encourage them to pick a charity to donate their money to and help them get their money to their preferred destination by bringing them directly to the foundation or to a nearby store or venue that collects donations. At a few local stores there are any number of tins to put loose change in. From my experience, children love putting coins into piggy banks and donation tins, so let them enjoy the process of both saving money for charity and then donating the money they did so well to save. Fill them in on where the money is going and why it is so important. The more charities they come to learn about, the better their understanding about their community becomes. 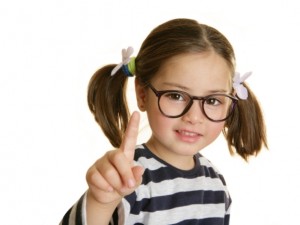 I had originally hoped to include two age groups in this week’s post, however it is better that I split ages 4-5 and 6-8 on account of the respective word counts. This is exciting though, because not only will this blog series be extended, but more information can be provided in each post. In any event, I will proceed to this week’s conclusion.

Financial knowledge decays. So, keep up the effort and good work with your children. Like I mentioned earlier in this post, it is not necessary for children to graduate from each stage of development by dropping previous lessons and activities. Should your child want, tracing coins and memorizing bank notes or playing “Baker-Baker” can continue up until early adulthood. Without sounding too funny, I wish I did just that. I think I knew more about running a business as a pre-schooler than I do now. Whatever keeps children entertained and learning should always be encouraged. The maturity of the child will help determine the maturity of the activity and I for one am not going to call baking immature.

As for the newly introduced activities, challenging your children with an appreciation for who they are and where they are at in their development is a good thing. And so getting them to role play slightly advanced scenarios can be entirely positive, provided there is adequate guidance from the parents or adults involved. Don’t be afraid to embrace certain concepts with your children and the more you are involved, especially as a parent, the better it is for everyone. The best way to learn about who your children are and who they may become is to learn with them. I was once told that wisdom is not an accumulation of knowledge, but instead the desire accumulate knowledge, regardless of one’s age. If parents were more willing to learn and were not afraid to learn with their children, the future of any society would be significantly more promising.

And finally, the three basic disciplines with regards to money, saving, spending and sharing. These are important for every one – of all ages. The world could very well be a far better place if these three things were held in a greater esteem and taught with that in mind. From the leaders of a country right down to the children learning to become positive and active members of any society. For example, if our country’s leaders understood that saving money where necessary was more important; spending money where necessary was more important; and sharing money where necessary was more important – how much better off our country would be. That’s just one example. Producing financially savvy children to become competent adults and potential leaders of our country in every, and any, department should be of the upmost importance. Trust today’s children as we would trust tomorrow’s adults and the future becomes perceivably brighter.

CLICK HERE TO ENTER OUR COMPETITION AND WIN GREAT PRIZES! INCLUDING A R10 000 HOLIDAY IN SOUTH AFRICA